I would like this as well. Was a good tool to know when I am overdoing it with the dsp on my k50.

Just an idea, Admin (admin) and no password. Worth a try.

Hi there, that is the admin menu, I won’t be releasing the password sorry.
However happy to take feedback on items wanted in the main menu.
So far 2 votes for resource monitor.

I’m also in for the resource monitor since cpu loads are essential for the lifespan of our dear Antipodes gear.

+1 on the resource monitor

Vote to include the Resource Monitor in AMS Dashboard poll

There is a poll here if you wish to have this added to the dashboard.

29 votes for resource monitor! Possibly users do not realize how useful this can be.

Resource monitor allows for easy monitoring of CPU Core temps, CPU use and memory use (Euphony OS ©). Regardless of operational status.

Here’s a visual, why a user wouldn’t want to have this? I think it’s a great feature when you get into more demanding processing and wonder if for example a S40 would do better than S30. 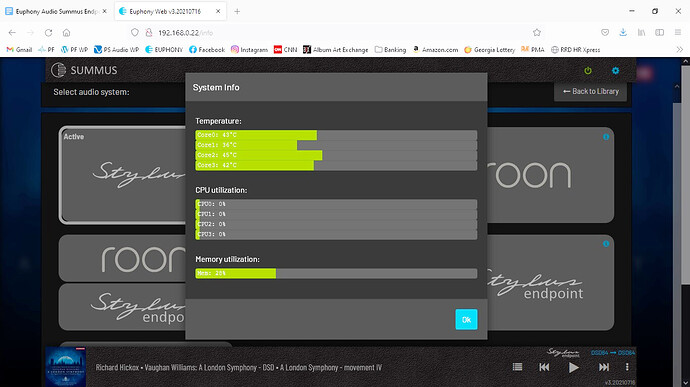 Forgive my ignorance but assuming the resource monitor is implemented, what would I do with it? For example if the cpu temp is high would I need to shut my system down? I would have to know what is too high etc. Apologies to those who are more computer savvy.
Rob

It would show the CPU speed, excess CPU load can damage your unit.
For example in Roon, if you left on the background and or on-demand audio analysis speed the CPU could be overloaded and excess heat will damage your Antipodes product.
As Antipodes products have no fans heat can build up quickly.

WARNING IT IS SET BY DEFAULT to be on

Or to monitor CPU usage if you use HQP or to check if something is running at full speed another example would be if you set up two music folders and Roon was constantly scanning between both.

@MarkCole can we have a temperature monitor as well ?

Thank you for your reply.
Rob

For example in Roon, if you left on the background and or on-demand audio analysis speed the CPU could be overloaded and excess heat will damage your Antipodes product.

What are the recommended settings? Whilst they might possibly be on here somewhere, I’ve been unable to locate any instructions as to what those settings should ideally be.

On my K50 I’ve currently got them set to background analysis throttled & on demand analysis fast. That was what the K30 demo unit I originally tried was set too & so I set my K50 the same.

Where is the information to be found & warnings about Antipodes units running hot with certain settings? I can’t actually locate that either.

My unit runs cold with the above settings & always has done. To the extent you’d barely know it was switched on.

On my K50 I’ve currently got them set to background analysis throttled & on demand analysis fast. That was what the K30 demo unit I originally tried was set too & so I set my K50 the same.

Where is the information to be found & warnings about Antipodes units running hot with certain settings? I can’t actually locate that either.

The very fact that Roon has multiple settings for how the analysis is performed should be a clue that not all devices running Roon are going to be handle this workload. I’m sure Roon’s own literature speaks to this fact.

The AMS 3.0 users guide had language about this but I can’t figure out where they moved this to.

Regardless, it shouldn’t be too difficult to approximate the right settings based on the CPU in one’s server. If it’s a dual core then letting analysis use two cores could get the CPU really hot. There are no fans in Antipodes servers so this is not wise. If the server CPU is a quad core then no more than two cores to analysis would be wise.

Also one needs to take account of what effect scaling might have. Yeah it stinks that we no longer have CPU graphs but again one can approximate things.

Sure it would be nice to have all this laid out in a manual, but Antipodes is obviously going through a significant transition. They are a small shop and their focus has been on getting new products and new software into our hands. That they prioritized this over documentation was what they had to do, unfortunately. Getting every single customer to 3.x was a huge effort so I think they earned us cutting them some slack on the documentation. The goal of this forum was to actually ease that burden by allowing us to help each other.

(I work in the software industry in a role that has me saying many of the same things to our customers so that’s why I am speaking up here. This crap ain’t easy.)

The AMS 3.0 users guide had language about this but I can’t figure out where they moved this to.

Which is fine for those users who have owned their units for some time & are already aware of the issue. However for new customers that aren’t, it needs further highlighting. That’s if it’s actually highlighted at all anymore, because I’ve still so far been unable to find it.

It’s not been an issue for me as I set my unit up with the idea of giving everything a pretty easy time & I vaguely remembered having read something somewhere. I only wish I knew where & if the information is even still available.

It could cause an issue for a new customer though & possibly even lead to damage. Especially if they pay too much heed to various recommendations on the Roon forums. Hence why the issue needs to be more clearly highlighted here.

It could cause an issue for a new customer though & possibly even lead to damage. Especially if they pay too much heed to various recommendations on the Roon forums. Hence why the issue needs to be more clearly highlighted here.

I disagree. The default value in Roon is set conservatively. If someone opts to change this setting without understanding the implications then having text in a manual probably won’t help them. The text was there more to benefit Antipodes as far as warranty coverage so if it was found that someone ignored their warning they could deny coverage. With no warning, of course they’d have to cover the repair.

Additionally, this is a Roon software question. I don’t think Antipodes should even be on the hook to speak to this. It should be Roon who explains the implications of their software and they do: https://help.roonlabs.com/portal/en/kb/articles/audio-analysis

Thank you, but I’m fully aware of what’s written on the Roon site with regard to background analysis, along with the some of the poor advice on the forum.

What I was actually looking for was the information/warning provided by ‘Windyb’, which I personally recall seeing previously, regard as essential & which I can’t find now.

Was this perhaps from an old manual? Below is a scan of the only instructions that shipped with my K50. 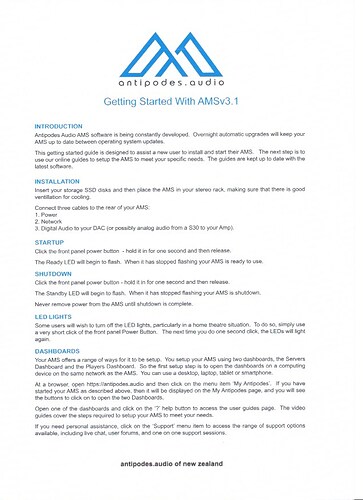 Regarding Roon background audio analysis, it CAN over load your CPU and cause heat issues.
It did for me BUT I have a very large library…
Further more I do not need Roon fiddling about with volume settings which may degrade the SQ, the cleaner the file is played with out any added EQ the better IMO.

Thank you for the above information. That’s exactly what I was looking for, but might I enquire as to where it’s actually located?

It’s just that if I can’t find something as important as this, then maybe I’m also missing something else.

Thank you for your helpful input. What would you personally regard as being the ideal settings? Would that be all analysis turned off?

I don’t let Roon interfere with volume settings either. I tried it, hated it & turned it back off.

I switch off anything that can change the play back also I switch off volume control something else that fiddles with SQ IMO… and no DSP.

The problem with a new Roon install audio analysis is set on by default and you have to be quick the change the settings.

I am uncertain once any audio analysis has been done if the effects are permanent on payback within Roon as Roon must store the information somewhere for playback…
It could be why some people find Roon smearing the playback and prefer LMS as a server ?

I must admit I have been on LMS and Squeeze for a week or so and will be switching back today to Roon Squeeze. I will report back which I prefer SQ wise.