Who uses Material? What are your thoughts? Did you know it is configurable? Do you launch it from shortcuts?

I use the Material Web Player for Squeeze on the K50 and I am pretty pleased with it.

One thing that I cannot get used to after using MPD is that after selecting a track, one is then required to select ‘Play Now’ but I guess I will accept that in time!

Greg, the main advantage to me of Material with Squeeze over Roon is the better sound quality compared to Roon.

Appreciate your perspective Nick.
In my system I can’t discern enough of a difference in sq to make Material my primary interface. I actually spent some time yesterday with MPD and thought it sounded pretty good as well. Another thing I tried the other day, and am staying with for now, is Roon Ready instead of Sqeezelite for my player app in Roon. I had never tried it before in the several months I’ve had the K50 and when I switched it sounded better to me, which I didn’t think was supposed to happen. Always a chance it could have been a one off - some nights the system just sounds better for whatever reason. Of course my inability to discern the difference between Material and Roon naybjust be a lack of audio acuity, and who would ever want to admit that!

Greg, thanks it is always good to get other points of view and this is not a static thing because the alternatives keep changing. For me it was lower mids and upper bass that sounded muddied with Roon/Squeezelite compared to Squeeze/Squeezelite or MPD. I will keep going back to Roon though to keep checking!

Also, I do not want to finally decide on how I listen until 3.1 is released then I will try all the options again.

I will have to pay attention to that frequency range and see if I pick up on that.

Hello, I am trying to get away from Roon and is looking for the most convenient iPad app to manage Squeezebox. How do I access Material Player from ipad?
Thanks in advance.

Hi there, as Material is a web player, the easiest way is to launch material from myantipodes and save it as a shortcut to your home screen, instant access, no app required.

I understand, you can launch it from myantipodes if you are on software version 3.0. I am currently on 2.8.

If you click or tap on the Logitec Medis Server app icon, you should get the web player launched, you can the go to plug-ins and install the Material Skin, and as above set shortcuts to your browser or homepage to launch the app.

You can also try free Squeezer app that I installed in an old android phone at my sofa as a remote control as well as my current phone that I carry with me.

Nothing further to share since it just works 100% of the time especially when I wish to quickly check playback bitrate.

Squeeze + squeezelite gives the best sound quality on my EX/CX Combi. Material skin is fine. Searching is more complex and less refined than within Roon.
Also I have the issue some tracks seem to be stuck at the end. Soundwise squeeze is better in my opinion.

oundwise squeeze is better in my opinion.

Agreed. Thanks for sharing your impressions.

Let’s not forget iPeng as an interface/controller. Nothing special but it functions. Probably Apple only. iPhone/iPad.

Let’s not forget iPeng as an interface/controller. Nothing special but it functions. Probably Apple only. iPhone/iPad.

Yes, and indeed there are some aspect of iPeng that I prefer compared to Material.

I believe my Squeeze server has reverted to the Material browser that existed prior to Antipodes making some enhancements of their own. I’ve been trying to avoid restarting Squeeze server for fear it will change back. While I very much appreciate what Antipodes was aiming for with their enhancements, I think Material had evolved to be the best music player that’s not named Roon.

From a UX design perspective, Material does a fantastic job of filling the screen on a mobile phone. Pretty much anything you would want to get to is accessible with a single tap from this page. 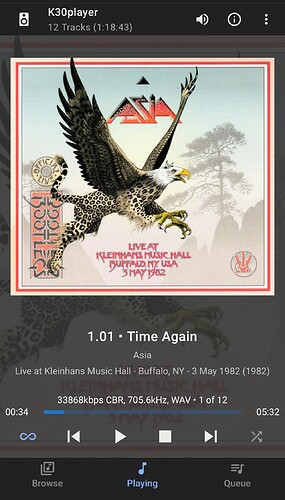 It’s even better on an iPad as there is no need to bounce off the following page unless one wants to visit the settings. The Antipodes modifications ended up displaying on my iPad pretty much what one sees on an iPhone (above) but with four icons at the bottom to switch between browse, playing, queue and info. As I said, I appreciate the great intentions, but that was really a big step back in usability on an iPad. I would pay extra to get be able to keep the view that follows. 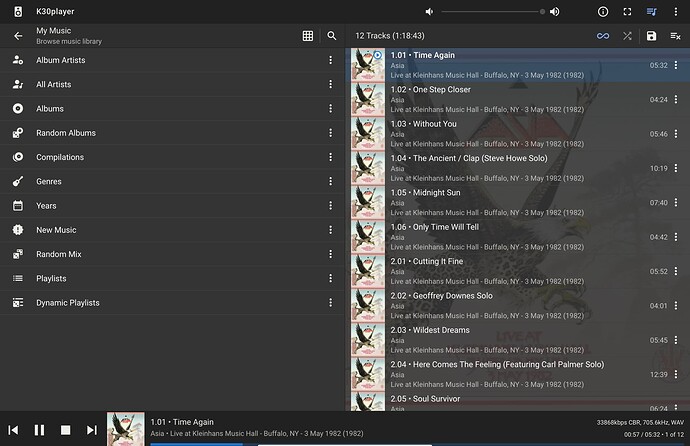 Mine seems to have reverted to that of its own accord. 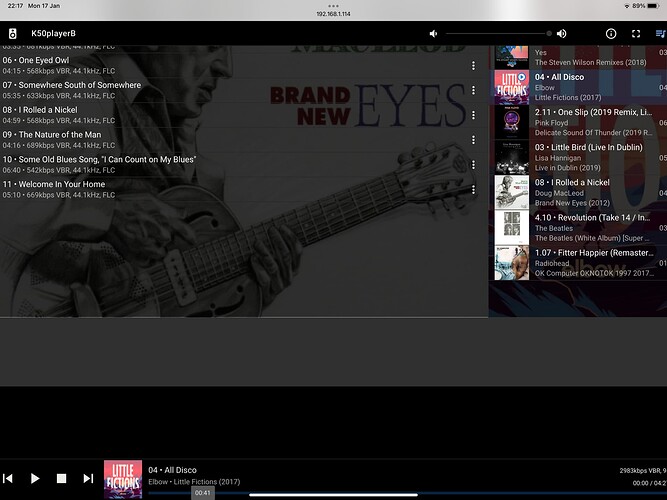 Mine seems to have reverted to that of its own accord.

I wonder if that was somehow pushed out to us. Maybe see if it reverts if you restart Squeeze server.

Over the last few weeks I’ve been exploring with various ways to play music on my Poly/Mojo. That’s what prompted me to say good things about Material.