Are Antipodes thinking to implement a software/player App specific to Antipodes streamers, like Innuos with their Sense app or Taiko with the new XDMS ?

The owners of these devices boast of the superior sound quality compared to Roon or other software.

ANYTHING sounds superior to ROON but after careful listening I personally am not convinced that the Innuos Sense software sounds better than Squeeze+Squeezelite and I have not heard the Taiko so cannot comment.

I think nunobrazuna is referring to a new Antipodes app that has the potential of elevating the sound quality of the current squeeze configuration, that, by the way I would not even call a player app. It is more like an optimal configuration based on a combination of two chosen apps running on server and player respectively. As for player apps, Antipodes users depend on other developers (Material, iPeng and the like) and we get a bit of everything.

Besides providing superiour sound quality, an other feature that could be included is to effortlessly explore your music. Or as Innuos calls it;
Sense App, Changing the way people interact with music. It offers one place to browse, play and manage your entire music library. It is sleek and responsive allowing you to immerse yourself in what matters most, your …(see Innuos website)

So yes, I also do support this idea whether at launch it is better or not than squeeze+squeeze. And besides, as comparison Roon came a long way regarding interface but also soundwise. Sure it can be beat, but not that easy. And who else is better placed than Antipodes to get the best out of the streamer /player boards and optimise UI integration with the hardware?

At least a new Software /Player app for Antipodes streamers has the potential to evolve in a better player app. Roon had the potential of becoming the ultimate player visually (it did actually) and soundwise (ok, it did not). Maybe now the time has come for others to improve on Roon for I guess quite a small but important and growing group of audiophiles. Antipodes for now chose to depend on the Squeeze development (and Roon, MPD, HQplayer and so on) but they could go their own way with a specific Player app for Antipodes streamers. I think it would be great if the idea could have the support here of many Antipodes users.

ANYTHING sounds superior to ROON but after careful listening I personally am not convinced that the Innuos Sense software sounds better than Squeeze+Squeezelite and I have not heard the Taiko so cannot comment.

My take on it is that Sense is simply a replacement for LMS and the apps that query it (Material and iPeng). I believe it still uses their tweaked version of Squeezelite for playback.

My take on it is that Sense is simply a replacement for LMS and the apps that query it (Material and iPeng). I believe it still uses their tweaked version of Squeezelite for playback.

Perhaps but there is a lot more going on by way of user interface processing and when I compared them side by side on identical machines there was quite a difference in sound and I preferred the pre 2.0 / Sense server/player software. Doing my side by side comparison is the only realistic way of hearing a difference because to download and install the 2.0 software took quite a while during which audio memory will probably evaporate. Also there was no way to load the earlier software after upgrading.

Again, I understand OP is not comparing sound quality, only comparing with development by other brands. OP is suggesting to develop a software player app for and by Antipodes with optimal sound quality.

I understand you are satisfied with squeeze+squeeze. (AMSv3.13 Squeezelite v 1.8.7 , today it’s 1.9.9. No idea if it sounds better?). But we all know it is very likely one day this will be beaten. I would add to that a great UI. Who would not support that idea and have best of both worlds and encourage development of one Antipodes place to browse, play and manage offline and online tracks?

Paul, I don’t disagree with any that you say but the difficult part is achieving what you suggest and not compromising sound quality. I sometimes wonder whther something like Roon or Sense would benefit from an option to switch over into minimal interface mode when ultimate SQ is demanded.

Forgive me asking but are you part of Antipodes and therefore speaking with authority on these? It is not a trick question, I am just curious how you know that we are to get a better USB implementation soon.

I believe it still uses their tweaked version of Squeezelite for playback.

Good point. If Innuos can tweak it, than Antipodes possibly could also. And Innuos users have been very enthusiastic about audible improvements.

Hi Nick
Fair question. No I am not part of Antipodes but unless I am mistaken Mark mentioned the USB improvement here. I try to look it up. Maybe it has been executed already for the Oladra and will come with the new K and S series. I just removed ‘coming soon’, thanks.

Hardware Modules; what board is inside your K or S series?

Of course the USB changed - the Player board changed, and it has also changed in the Oladra.

I sometimes wonder whther something like Roon or Sense would benefit from an option to switch over into minimal interface mode when ultimate SQ is demanded.

Optimizing and streamlining is another approach together with tweaking and adapting. If you are familiar with Euphony OS, it clearly shows tweaking resources can deliver.
Of course there is also a ‘hidden’ part of tweaking and optimizing in AMSv3.13 besides the incorporated software (Squeeze, MPD and others).

I am not a Roon user (anymore) but only yesterday I read on AudiophileStyle about an
option activated by default for reading flac files. This needs to be deactivated to (according to some) dramatically improve sound quality (I copied below). Too late for me to try, but of course much more can be done, whether it be tweaking the current software or developing new software or add ons.

I think all we are saying is yes, it is worth looking into an improved Antipodes app. Do we know exactly what it will do or what it will look like? not yet. But this forum seems the right place to share developments users are aware to support this idea.

I am not a Roon user (anymore) but only yesterday I read on AudiophileStyle about an option for reading flac files that needs to be deactivated to dramatically improve sound quality. 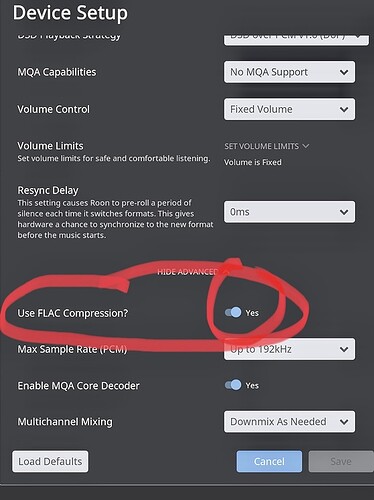 Yes it does indeed make a huge difference & is only an option when using Roon server with Squeeze player. I didn’t read about it anywhere, but discovered it myself not long after I first started using Roon & when trying to find out why Squeeze player originally had such a hard acerbic edge when used with Roon server (especially with piano).

I also mentioned it in a recent post on this forum. See below:-

I think it perfectly illustrates that if you use other and different apps on your Antipodes hardware, some glitches are unavoidable and possibly compromise the sound quality. The more (player) apps are designed in-house and incorporate all these known tweaks, the better the sound quality.

Being still relatively new to Roon myself (around 6 -7 months) I’d rather assumed on discovering the FLAC compression setting & turning it off that I’d just missed something obvious & put it down as my user error caused by a lack of sufficient research.

I’ve been using that set-up almost since the beginning & it was only on discussing it with a couple of others & finding out that they (a) hadn’t ever tried it & (b) my receiving very positive feedback when they did so, that led me to think I should perhaps share it.

Without wanting to speak out for other audiophiles, Roon has been a neverending story for many years about why it just doesn’t sound as good as it could? Combined with the UI it could have been perfect for the ear and the eye. And it is for many. But other users tried and gave up and moved on.

Unfortunately, to my understanding and in layman’s terms, Roon almost continuously keeps a door open to the Roon servers, or adds some compression if not turned off as you found out, where other less good looking players with the proper settings applied do stop or minimize this interference, not only from ethernet but also from local hardware and processors. For examble some streamers can completely cut off ethernet while playing an album after it has been locally buffered to RAM for example.

It seems, and not everything is known yet, that this stream of sound, flowing as freely as possible can become extremely resolving, making us hear again everything that was there just before it entered the microphone(s).

Antipodes, Innuos, Taiko, Pink Faun and Grimm to name a few, all engage in perfectioning this local stream, with and/or without Roon and with or without their own app (to bring us back to the header of this topic

At Antipodes we are always striving for excellence, as a small company with limited resources we need to take a stepped and planned approach to our development.
We have many ideas regarding software etc we are currently looking torward AMS4.0 which focuses on big improvements in GUI and usability.

As I understand, Innuos Sense in no more than a tweaked Squeeze Player ?
And that kind of tweaks is already taken by Antipodes ?

I suspect Antipodes uses the stock releases of squeeze. They may have tweaked a few default settings in the material skin. The ams skin appears to be their own but probably sonicorbiter lurks beneath.

I suspect Antipodes uses the stock releases of squeeze. They may have tweaked a few default settings

Interesting, I am curious why do you suspect that? Did you compare with other tweaked versions of Squeeze?

I hope this makes sense?